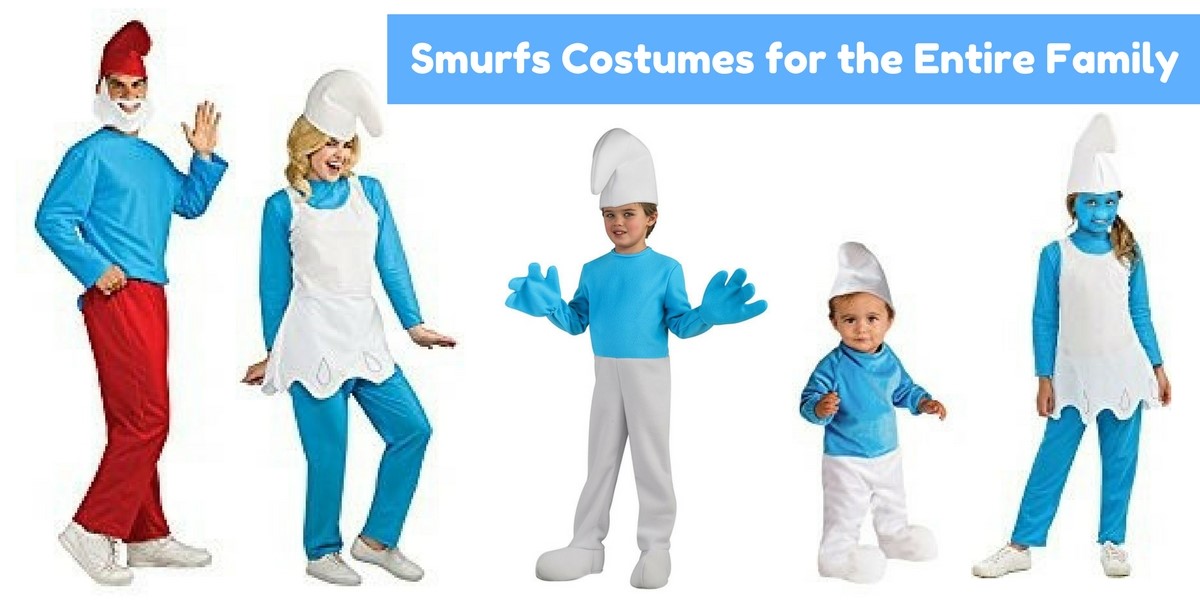 I used to love Smurfs when I was little and now, all these years later, my kids love these blue skinned creatures. Smurfette was always my favorite and I cherished my little Smurfette plastic toy. Since I played with that toy so much I’m surprised it didn’t get lost. I actually still have it all these years later. It’s no wonder we all love Smurfs Costumes for Halloween. They’re a fun way to enjoy Halloween. If you’re keen to dress as a Smurf, here are the details you need.

In the 2017 movie Smurfs: The Lost Village, Smurfette and her friends have to get through obstacles like the Forbidden Forest on their way to uncovering a secret. As they try to find the village, the clock is ticking and Gargamel is determined to stop them.

⇒ Click on one of the images for more details and the price.

Looking for a sexy Smurfette costume? For the price, click the image.

One of the most popular Smurfs is Smurfette. In the movie, she comes to life thanks to the voice talent of actress Demi Lovato. You can find her movie costume done in a few different variations, but the color design is basically the same.

The toddler Smurfette costume will usually fit an assortment of sizes.

You can get one to fit a newborn all the way up to a child who’s about 39 inches in height. The costume you need for this age is usually a romper piece, and some of them are designed so that the white piece is actually made as part of the blue rather than extending out from it.

But with the toddler one, you usually get the cute little Smurf headpiece along with the romper. Keep in mind that the blue Smurf hands don’t come with most of these costumes.

There are some costumes available as Smurfette for older girls. Instead of the flouncy end of a romper though, most of these are the top and pants.

The top is usually designed to have the same white top look that the character wears, but it’s usually over the long sleeved blue to mimic the skin of the character.

If you’re looking for a women’s sexy Smurfette costume, the dress comes on its own and you need to buy the wig and hat separately.

Do Smurfs costumes include the hair for Smurfette?

⇒ Click on one of the images for more details and the price.

Smurfette costumes usually don’t include the hair but it can be bought separately. You’ll find several styles available online. Some wigs are very yellow and others are a more natural blonde look. It depends on how close to a cartoon character you want to look.

The headpiece often comes with the costume as well. You’ll have to get the footwear separately. You can also find this costume in adult sizes although the hat may be made of slightly different materials from the kids sizes.

Most of the Smurf and Smurfette costumes you see available don’t include the hands or mittens (as they’re often referred to). If you want the hands, you’ll have to buy them separately.

Not having them won’t be a big issue with younger kids since many of them don’t really like having things on their hands.

But for older children, they love the hands so be sure to order them online at the same time as buying the Smurfs costumes.

You can also buy the white feet as shoe covers, separately from the costume. These are not expensive but they’re a great touch for authentic Smurfs costumes.

If you want Smurf costumes based on the movie there are plenty for boy Smurfs. The jumpsuit design is most popular. Some of them have the blue top along with the white pants made as one piece.

But what you can find with some  of the boy costumes are shoe covers as well as the mittens designed to look like Smurf hands.

⇒ For the price, click on one of the images

You can get an adult man’s costume that’s in the same design as the boy’s costume which also includes the mittens for the hands. The men’s costumes include plus-sizes.

Smurfs masks are also available in characters such as Grouchy Smurf, Brainy Smurf or Papa Smurf.

You don’t want to forget the beloved Papa Smurf when you’re thinking about costumes.

This character has a costume that consists of the shirt, the bright red pants and the matching hat. Some of these costumes also come with the hair and beard with the cap.

⇒ For the price, click on one of the images

Dressing up as the Smurfs would make a great group or family Halloween costume. The more Smurfs the merrier!

The great thing about Smurfs costumes is that if you already have the shirt and the pants, you can add to your costume with a mask, hat, shoe covers or wig. This is quite a flexible costume.

And it’s an easy way to get the family to dress in the same theme for Halloween.

This is such a cheap item but it makes all the difference to your costume.

Younger kids don’t need this on their face because it ends up getting on everything.

But older kids think it great. And it really does look good.

Smurfs costumes are easy to put together and easy to wear for parties, trick-or-treating or for school costume days.

⇒ What about LEGO Batman Movie costumes? Click here to get the details.

⇒ For all the details on Despicable Me costumes, click here.