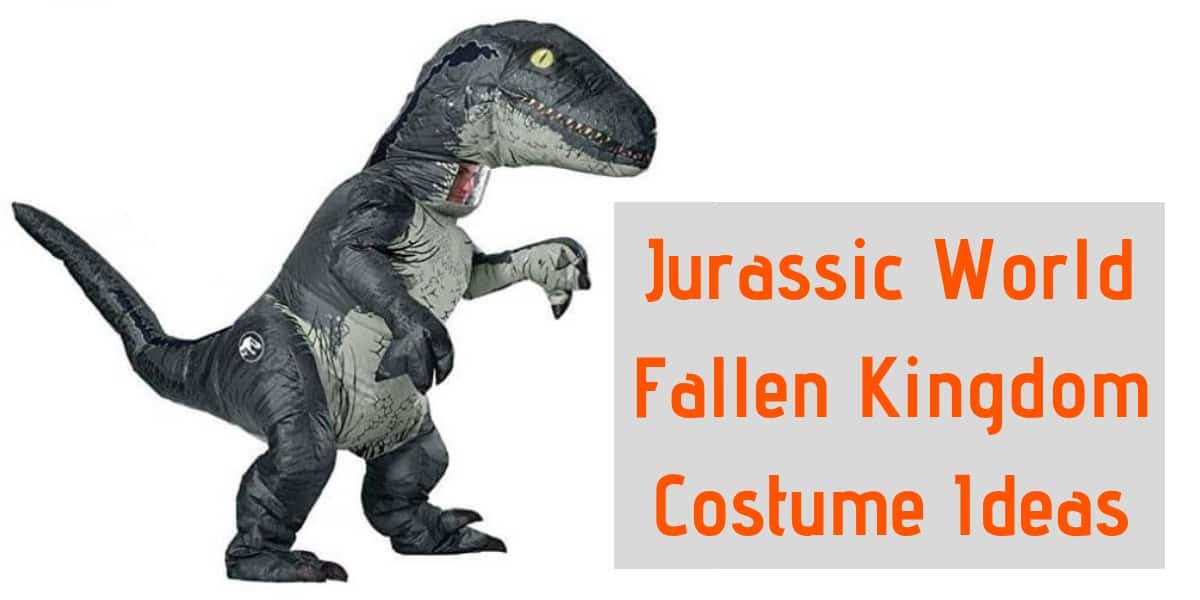 If you’re looking for one of the hottest costume ideas this year, take a look at these Jurassic World Fallen Kingdom costume ideas. With so many good costumes to choose from you can even dress up the whole family in this theme. There are costumes for adults, kids and pets.

Let’s take a look at the best costumes – and the Jurassic World Fallen Kingdom costume ideas are not all dinosaurs!

Just to refresh your memory…on the remote Isla Nubular, an island off the coast of Costa Rica, is a tourist park named Jurassic World.

It opened to the public in 2004 and contains dinosaurs that were cloned from prehistoric DNA.

After a decade of the park being open, it closed thanks to the containment breach, when the Indominus Rex got loose.

Aparat from the dinosaurs, one of the most popular costumes from this beloved movie is the one made replicating Owen Grady.

Owen’s most famous piece is the vest that he wears through most of the movie. If you want a Jurassic World Fallen Kingdom costume, you really can’t go past Owen’s vest.  You can purchase the zippered vest in multiple sizes. The sleeveless piece also comes with zippered pockets.

If you want to buy a complete outfit for Owen you can get a costume with vest, shirt and pants. Take a look at the image below.

This costume is a good way to complete the look and it is cheaper than buying the high-quality vest that  was shown above that you can buy on its own. That one can be worn for everyday wear rather than as a costume. But if you know you’ll only wear the costume then you may prefer this full set.

Some of the other popular Jurassic World Fallen Kingdom costume ideas from the movie are definitely not human.

The dinosaurs take center stage and even though they’re the antagonists, you find yourself rooting for them. If you want to be one of the more dangerous dinosaurs, you can go as the Indominus Rex, click here  (there is also a kids version, click here to see more).

This dinosaur was one of the main antagonists of the Jurassic World series. She was created from a mix of genes from other dinosaurs, including the T-Rex, Rugops, and Velociraptors.

The Indominus Rex costume is a jumpsuit with detailed scales on it (see image on the right), designed to look just like the fearsome predator.

Boot covers are attached to the suit so you can have the same clawed feet as the dinosaur. This is an advantage because many costumes end at the ankles and this often detracts from the look. With this costume you get the feet included.

✅   If you’re just wanting the mask, you can get the kids Indominus Rex Mask here.

While a lot of Velociraptors picked humans off in the movie, one of them did become Owen’s pal.

Blue is a cute Velociraptor and now you can dress as her for Halloween. So, the costume is a jumpsuit with detailed scales to give the appearance of the Velociraptor. This suit also comes with attached boot covers and with claw-like fronts.

In addition to the costume, the mask is also included. But there are no claws for the hands. If you do want claws you can buy them separately, see the price here.

If you’re looking for a Velociraptor mask, this electronic Chomp’n’Roar mask with sound effects is great with kids. When you open your mouth it makes a roaring sound. The eyes really move and the head strap is adjustable. It comes with the battery in place ready to go. This is a good costume idea for Halloween, kids’ parties or any other costume event.

If you want something dramatic, go with an inflatable dinosaur costume. Here is the inflatable Velociraptor from Jurassic World Fallen Kingdom. 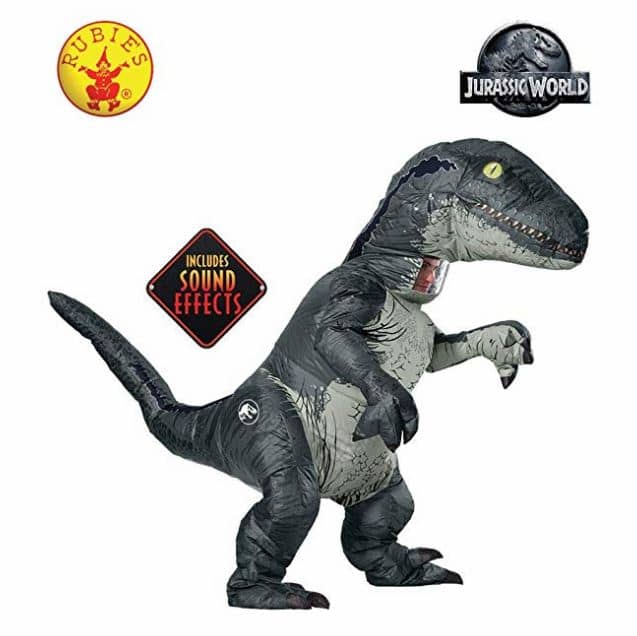 ✅   Click Here to see the price on this inflatable Velociraptor

An inflatable costume really makes an impact. These types of costume have become really popular this year.

So, if you want something that will get talked about, this is the costume for you. And if you want the Jurassic World Fallen Kingdom costume theme in particular this is a great way to combine it with an inflatable costume.

There is also a kids’ inflatable dinosaur costume in Velociraptor, click here to see more. Almost everyone loves this costume, so it’s a big hit with boys and girls.

The children’s inflatable Velociraptor costume is suitable for up to 54 inches in height. It is a full body costume with hands and feet enclosed.

If you have a little one, you’ll want to check out the baby T-Rex costume. You could use the Jurassic World Fallen Kingdom costume ideas to dress the whole family in this theme.

The most popular T-Rex in Jurassic World is undoubtedly Roberta although her name in the novel was Rexy.

She inadvertently saves the main characters of the movie from other dangerous dinosaurs. She is the largest carnivore on the remote island.

If you’re looking at Jurassic World Fallen Kingdom costume ideas, you should include your baby in the theme. This adorable baby T-Rex costume is a small jumpsuit with an attached tail and soft headpiece.

The headpiece is plush, so it won’t irritate your little one when you take him trick-or-treating. To add to the cuteness of this costume, the jumpsuit comes with an attached cracked “egg” so it appears as the baby dinosaur is hatching.

If you have a slightly older T-Rex in the family then you may be interested in this kids’ inflatable T-Rex costume.

If you’re looking for Jurassic World Fallen Kingdom costume ideas for the family, you’ll want to include your pets. If you want to get your favorite canine dressed up for Halloween, here’s one of the best costumes for your pet.

✅   Check out this T-Rex Costume for Pets, Click Here

The T-Rex costume for dogs is similar to the one for babies, but it’s a simple slip-on with arm holes. There’s a velcro strap that attaches under the belly.

It also comes with a head mask with teeth that are wide enough so that no part of your dog’s face has to be covered. Also, this gives you more chance of keeping the mask on your dog’s head for longer. You’ll get some great photos with this costume.

⇒  Are you looking for Beauty and the Beast Costumes for your family? See more here.

⇒  Looking for Funny Adult Costumes for Halloween? Take a look at these.