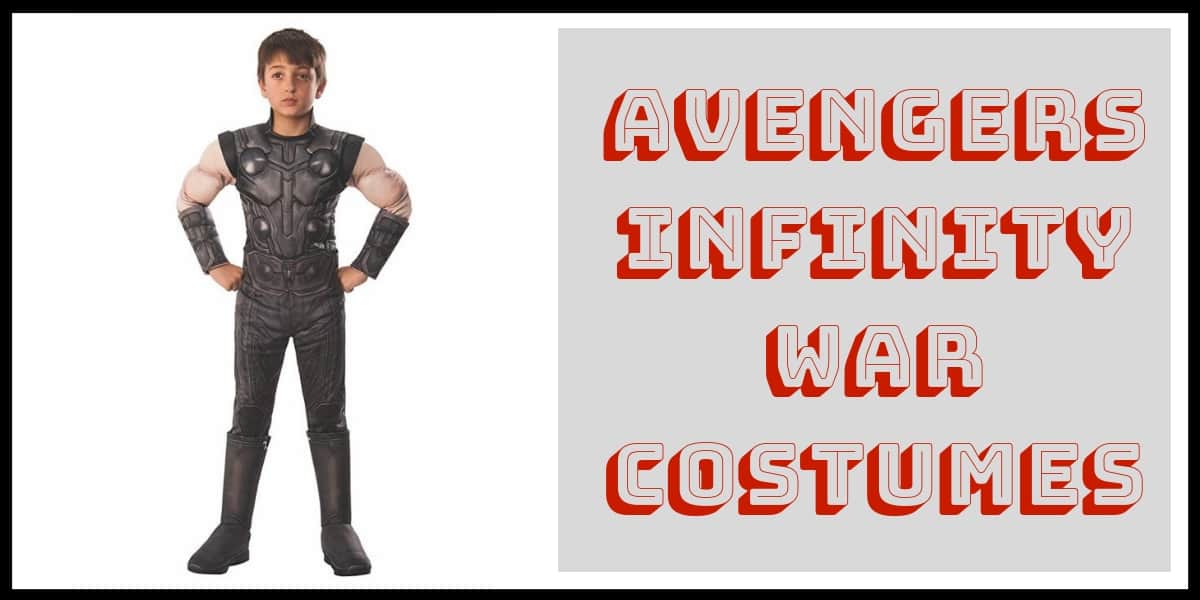 Some of these characters have been popular for decades. They’re the ones we grew up with. But if you want to dress as an up-to-date superhero, all you have to do is look at the Avengers Infinity War Costumes. With so many great characters you can choose one yourself or use them as a group theme.

Dress the family or get a group of friends together. Here are some of the best Avengers Costumes.

For the price on this kids Hulk Costume, Click Here

Since the first Avengers movie came out in 2012, the series has attracted a huge fan following.

Several superheroes come together in these films to stop the end of the world that seems inevitable. We all recognize how important that is. And we love the characters that save us.

In Avengers Infinity War, not only are we dealing with the Avengers characters but they come together with the Guardians of the Galaxy characters.

This gives you plenty of scope to choose your favorite. And if you’re looking for a group theme for a party, you can find Avengers Infinity War costumes for everyone.

Everyone knows Loki as the god of mischief, and Thor’s younger adopted brother. Loki is often resentful of Thor’s strength and power, but he also possesses a cunning mind and has attempted to take over Asgard multiple times.

Because of his personality, Loki, even though he’s kind of a villain is still a favorite among kids and adults alike. He is a popular choice for dressing in costume. Whether you’re looking for a costume for Halloween or you’re going to a fancy dress party for another occasion, Loki is sure to impress.

You’ll love the adult Loki costume. This one shown above is high quality. It comes with a top, pants, the sleeveless trench and also includes the shoulder epaulets and the cuffs. You get lots of detail on this outfit.

If you want the signature headpiece you’ll need to buy it separately from this costume. This Loki headpiece is a magnificent piece to add to your costume. It will really make a statement when worn with the rest of your Loki outfit. When it arrives you just need to attach the horns which are removed from the headpiece for safe shipping.

These type of Avengers Infinity War costumes are perfect for Halloween or a party and, because this one is high quality, when you’re finished wearing it you can place it on a mannequin. This looks great in a man-cave or the living room!

Personally, I love it when I see people making a YouTube video and they have one of these types of costume on a mannequin in the background. It always keeps it interesting!

If you’re looking for a kids Loki costume, take a look at this one, click here. This costume is based on Avengers Assemble, the animated television series. It’s not as “dark” as the adult’s costume.

The advantage of this one is that the Loki headpiece is included. This costume shown above is the Deluxe version. It costs a few dollars more but it’s worth it. The Deluxe version has more padding and uses better quality material. Lots of kids wear these costumes to play in and you want the costume to be good.

Despite having grown up together, Thor, the god of thunder, and Loki have a rivalry.

During his debut in the 60s, because Thor is arrogant, he’s stripped of his power and cast down to earth by his father who hopes to teach him a lesson in humility. Once there, Thor falls in love with a human girl.

The Thor costume on the right, above, includes muscle design in the arms to make the wearer look extra strong. This is a complete costume that comes with the boot covers as part of the costume. The top is separate from the pants and both are separate from the cape.

The hammer and blond wig are not included.

In Avengers Infinity War Thor doesn’t have the long blond hair, so it’s not really necessary. But if you want to use a wig it definitely will look good with the costume. You can get a Thor wig here.

If you want to purchase the Thor hammer for adults, see here.

And if you want to be completely up-to-date, check out this Stormbreaker Hammer Axe which is new to Thor in Avengers infinity War. It is not included with any of the Thor costumes and needs to be bought separately.

✅    See the price on this Thor Stormbreaker, click here

If you’re looking for the vest and cape for Thor, you can buy them on their own. This is a good idea because you can wear the vest as it is or pair it with a black long sleeve top. You can wear your own black pants with it too. If you’re looking for Avengers Infinity War costumes that give you versatility to use some of your own clothes, then this one won’t disappoint.

This may be a more comfortable way to wear the costume because you are using your own clothes with it.

And remember if you want the Thor hammer, you can buy it separately (see the link above).

✅   Click Here for the price on this Thor Costume for Kids

This is the children’s Deluxe Thor Costume. You get the padded costume top with attached gauntlets, and elastic waisted pants with attached boot-tops. This is a complete Thor costume. It does not include a cape.

If you’re looking for a Thor Stormbreaker Hammer Axe like the one from Avengers Infinity War, take a look at this electronic Stormbreaker which makes thunder sounds.

This is new in Infinity War and really completes the look. None of the Thor costumes come with this accessory so you need to buy it separately.

If you’re wanting a Thor Stormbreaker without the sounds, take a look at this one.

If you want a slightly different idea for one of the Avengers Infinity War costumes, consider Doctor Strange.  For a lesser known superhero, Doctor Strange has a more ordinary origin story. He was once a well respected surgeon until a car accident severely damaged his hands.

He begins searching for a way to fix them when he meets The Ancient One, who becomes his mentor. Doctor Strange creates a suit from the Cloak of Levitation and the Eye of Agamotto. It is an amulet worn by Doctor Strange.

This Doctor Strange costume on the left looks good with the belt printed onto the fabric. It comes with a tunic with lots of detail but it doesn’t include the top, pants or boots. You can wear your own clothes for these.

And you’ll need to buy a red cape.  The cape in the image on the right is perfect with this Doctor Strange costume and it’s very affordable to get as an accessory. It is also good quality.

Here is one of the Avengers Infinity War costumes for Doctor Strange that is authentic to the movie. But it’s also more expensive. It includes everything shown in the picture below. The belt is real, rather than printed on fabric and the tunic is complemented with the red Cloak of Levitation.

✅   Check the price on this Doctor Strange Costume, click here

This is a high quality costume and one that will look impressive no matter where you wear it.

If you’re looking for a great female superhero to dress up as this Halloween, check out Gamora. She’s the adopted daughter of Thanos, and has several superpowers, including accelerated healing and superhuman strength.

Thanos raised her to become an assassin, so Gamora is also skilled in martial arts. Her costume comes as a jumpsuit. Portions of the jumpsuit are sheer mesh, which adds to the look.

The costume also comes with gloves and a belt like the ones Gamora wore in the Avengers movie. You can wear your own black boots with the costume. If you want to pair this with a Gamora wig, take a look at this one, click here.

If you’re looking for kids sizes, here is the Gamora costume for children. This is the Deluxe version and it comes as a jumpsuit with an attached coat and boot tops. You also get the green face paint included.

✅   Click Here to see the price on this Gamora costume

Click Here for the price on these foam Hulk fists

If you’re looking for one of the most popular Avengers Infinity War costumes, you really can’t go past the Hulk.

One of the strongest members of the Avengers team is the Hulk.

Bruce Banner is an average, shy physicist, but when he’s faced with emotional stress, he transforms into the Hulk.

As the green-skinned humanoid, he possesses superhuman strength. Exposure to gamma rays from an experimental bomb is what led to Bruce Banner developing this alter ego.

✅   For the price on this Adult Hulk Costume, Click Here

The Hulk costume is a green one-piece suit with defined padding in the chest and arms to represent muscles. The legs of the suit are a different color, symbolizing the pants Hulk wears when he transforms. This costume comes with the Hulk mask included.

Here is the kids version of the Hulk. Similar to the adult costume, the jumpsuit includes padded muscles and has boot covers. Also, you get the mask.

Get these large padded Hulk hands to complement your Hulk costume.

They fit kids or adults and can be gripped on the inside.

These hand accessories are soft inside making them comfortable to wear and fun to play with. They really add that little bit extra to your Hulk costume.

Whatever, character costume you choose you’ll be sure to enjoy your alter ego. And remember, if you need to dress as a group, go with Avengers Infinity War costumes and you can’t go wrong.

⇒  Looking for Beauty and the Beast costumes for the whole family? See more here.